This is a bit long, so click through if you’re interested. Note of course that these are EU laws, but so is the GDPR, and we’ve all experienced the effects of that. END_OF_DOCUMENT_TOKEN_TO_BE_REPLACED New strip is up!

Life is what happens when you’re trying to travel blog! The trip is long in the rear-view mirror but here is part 2.

After a quick breakfast from hell’s supermarket, and lots of vending machine coffee (I am low-key obsessed with Boss Coffee), we went to Himeji to visit the castle and gardens. I was a bit peckish so I picked up a fried Lovecraftian horror during the walk from the train.

The castle was wonderful. It’s a famous example of traditional Japanese architecture, and while it’s not got a history of super-famous people living there or anything, Kurasawa filmed Ran there. A lot of other movies were filmed there too! And it has a long modern history of being nearly demolished or bombed to dust, so lucky us.

Unfortunately, the weather wasn’t cooperating with photographs until we were just leaving. But here’s a nice pano that might give you the idea.

END_OF_DOCUMENT_TOKEN_TO_BE_REPLACED

When I woke up Friday morning, I had an email from a spec-fic magazine editor about a story I’d submitted. He wasn’t buying it, but he’s willing to work through a series of revisions with me, and see if he likes what I end up with. I’ve taken him up on that. (I know the story needs a little work, but I couldn’t tell you exactly how. It’s very helpful to have a pro articulating where it stumbles.)

So that great news was a great start to my vacation. I sent a reply and then got ready and we were off to the airport.

The flight was rather long. I bought a video game for it, Subnautica, which was recently released for Steam. I hadn’t heard of it before, which is kind of surprising since it’s right up my alley–survival/adventure/exploration, plus the horror of sea monsters. But then, I often don’t hear about a game when it isn’t on a platform I have yet. Too much to keep up with otherwise. I ended up playing it for six hours on the flight.

Customs was ruthlessly efficient, and after some weirdness trying to figure out the train tickets, we were off to Osaka proper. END_OF_DOCUMENT_TOKEN_TO_BE_REPLACED

I just wanted to check in and say that I am still alive, and about 70% of the way done scripting. I’ve been hitting the beta draft of my novel pretty hard, since I want to have it done and out to readers by the end of the month. (Incidentally, if you’re interested in beta reading, send me a message with this site’s contact form or leave a comment.)

As a result, I haven’t had as much time to work on Against Stupidity as I would like. Once I’ve got the novel out the door though, I’ll be able to work on the comic again without risking artistic burnout. I anticipate that this will start by April.

Apologies again for the delay. (Screenshot is from a wonderful writing platform I made called Pathfork. Feel free to sign up for it, if you’re interested. It is and always will…

New strip is up! Against Stupidity is back! New strip is up. 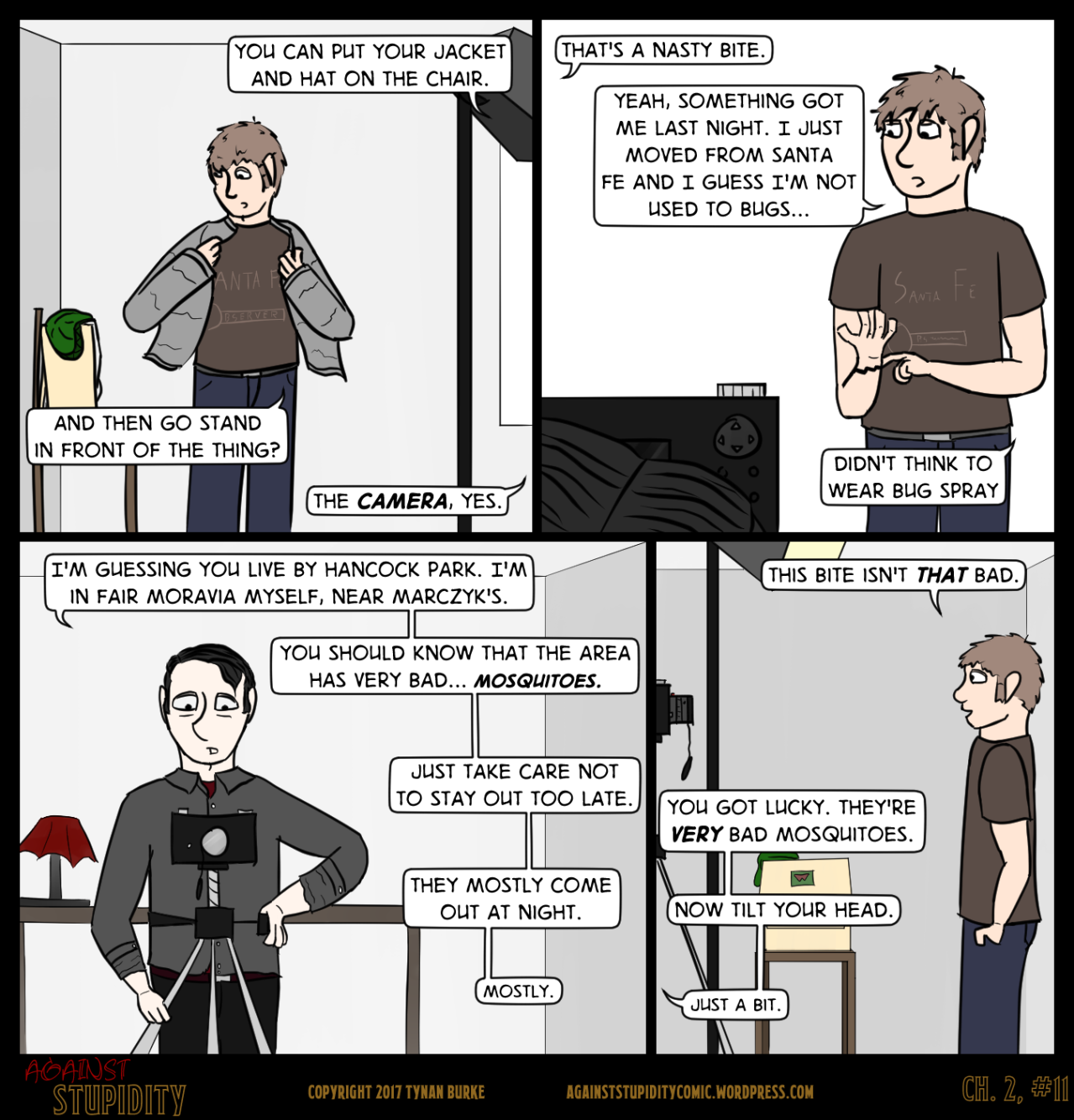 Check out this week’s strip on Against Stupidity!